The Best Obituary Ever, and the Wacky Funeral That Followed – The New York Times 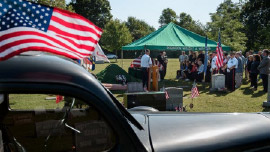 So when he died at 82 on Sept. 8, his daughter Monique Heller sought to provide it by writing a paid obituary in the local paper describing her father’s inimitably irreverent and preposterous personality.

Her humorous tribute was published — online and in print — last week in The Hartford Courant and immediately caught digital fire.

Readers loved the infectious account of this small town Everyman who embodied the tight-knit nature of this hamlet near the Connecticut River, between New Haven and New London. 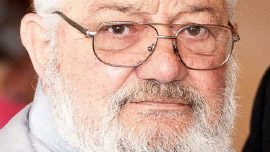 Mr. Heller was 82 when he died last Sunday.

The obituary listed achievements such as being a “consummate napper” and a regular browser of collectibles at the local dump.

“There wasn’t a road, restaurant or friend’s house in Essex that he didn’t fall asleep on or in,” Ms. Heller wrote, adding that her father “left his family with a house full of crap, 300 pounds of birdseed and dead houseplants that they have no idea what to do with.”

Ms. Heller wrote that her father had warned her against a fancy send-off when he died, preferring that his family “dig a hole in the backyard and just roll him in.”

“He said, ‘I don’t want any of that funeral home stuff,’” she said, employing an off-color word for stuff.

They disappointed him with a festive memorial Thursday evening at the town firehouse, where everyone told Joe Heller stories. The obituary implored attendees to wear “the most inappropriate T-shirt that you are comfortable being seen in public with, as Joe often did.”

On Friday morning, Mr. Heller’s body, in a coffin draped with an American flag, was placed on the 1941 Mack fire truck he helped restore and taken to Centerbrook Cemetery to be buried next to his wife, Irene, who died in 2015, and whom he embarrassed daily “with his mouth and choice of clothing,” according to the obituary.

Mr. Heller’s body was carried on the 1941 Mack fire truck he had helped to restore.Monica Jorge for The New York Times

Family members followed the fire truck in Mr. Heller’s immaculately restored 1932 Plymouth roadster with, as per his request, a set of plastic testicles dangling from the rear bumper.

Mr. Heller’s obit was shared widely on social media, first locally among his many friends in town and then around the world, leading to articles in countless news outlets.

Ms. Heller said on Friday that, “My friend told me that my obit started a new category called Joe-bituaries. She said, ‘You just put the ‘fun’ in funeral.’”

While many paid obituaries are often brief, grievous catalogs of survivors and funeral information, Ms. Heller’s submission was a snappy, unvarnished take on her father as one of the great pranksters in Middlesex County, Conn.

“God thankfully broke the mold after Joe was born,” she wrote.

Ms. Heller, the youngest of Mr. Heller’s three daughters, recalled her father’s doctor approaching them toward the end of Mr. Heller’s life and informing them that he was “a very sick man.”

Their humorous response: “You have no idea.”

The obit chronicled Mr. Heller’s wry outlook and his constant pranks, from passing laxative-filled cake off to friends who pilfered his lunch to bestowing his dogs with off-color names (the better to make loved ones blush when calling the animal).

“I wrote the obit for his local cronies and friends and never thought it would go any further, but I guess it just resounds with people,” Ms. Heller said, adding that comments and condolences have come in “from all 50 states” as well as several countries, including from as far as Australia and New Zealand.

“My friend told me that my obit started a new category called Joe-bituaries. She said, ‘You just put the ‘fun’ in funeral,’” Mr. Heller’s daughter said.Monica Jorge for The New York Times

“I’m thankful to the universe that this message of love went viral,” wrote “Dawn from Canada.”

“Sounds like he was an amazing bloke,” wrote John Williams from London.

“Good ole Joe could have been my relative — lol,” wrote Bruce Freshwater from Pittsburgh.

As a young man, Mr. Heller worked as a library assistant at the Yale Law School library before joining the Navy. With no money for college, he managed to secure a job as a self-taught chemist at a local makeup company, where he developed its early cosmetic lines.

When the company moved to Greenwich, Conn., Mr. Heller decided the new town would be too rich for his blood, and he opted to give up the job to stay in Centerbrook, among the working-class friends he treasured, Ms. Heller said.

“He was proud of being a blue-collar guy and not part of the old or new money of Essex,” she said of the municipality that includes Centerbrook and has affluent sections and a wealthy summer contingent with yachts and second homes.

Ms. Heller’s obituary noted that her father considered many of these people “wannabe blue bloods, snoots and summer barnacles that roamed about town.”

Mr. Heller was also proud to be a local civil servant, as a longstanding member of the Essex Volunteer Fire Department and a founder of the local ambulance corps.

“He got these jobs because he was the go-to guy in town,” Ms. Heller said. “When the town needed something done, they’d just call Joe.”

As dogcatcher, he customized the wording on his truck to read “Dawg Kecher,” and he staunchly refused to follow local guidelines requiring the euthanizing of some dogs.

Ms. Heller said her father raised his daughters on a steady diet of television characters like Archie Bunker and Benny Hill.

When young men sought to pick his daughters up for a date, Mr. Heller would first run their license plates and check their vehicles for safety, including an inspection of how worn their tires were.

When suitors entered the home, he made sure to be cleaning one of his guns, and that his collection of shotguns and harpoons were clearly on display, Ms. Heller said.

On Friday morning, a Navy honor guard — long known as the Antique Veterans Organization because of its aging membership — delivered a rifle salute, played taps and performed a ceremonial flag-folding ceremony.

The honor guard’s commander, Joseph Barry, admitted that Mr. Heller would have “dropped a few F-bombs” in declaring the whole thing superfluous.

After the burial, Ms. Heller held the American flag presented in her father’s honor and said perhaps the obit had struck a chord with regular people.

“People like my dad are the backbone of this country,” she said, “and I think the world wants to hear their stories.’’

RSS feed for comments on this post. TrackBack URL