Request An Appointment Download Our Forms Leave a Google+ Reviews 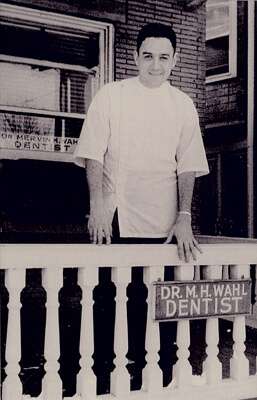 Dr. Mervin H. Wahl in front of his first dental office at 23rd and Market Streets in Wilmington, approximately 1953.

After attending PS duPont High School, the University of Delaware, and then the University of Pennsylvania School of Dentistry, Dr. Mervin H. Wahl fulfilled his lifelong dream of becoming a dentist. He completed his internship at Jefferson Hospital in Philadelphia. After that, he was a dentist in the Army at the end of World War II. After working for another dentist briefly, Dr. Mervin started Wahl Family Dentistry at 23rd and Market Streets in Wilmington in 1949. In 1964, he moved his practice to the Independence Mall on Concord Pike and was one of the original tenants there. He married Joy Haber Wahl in 1958 and she became office manager. In 1965, Dr. Mervin learned about the poor dental health of children at the St. Labre Indian Reservation in Ashland, Montana. He was so moved that he brought his wife and three young children in the middle of winter (January 1965) and set up a dental clinic there, donating his own equipment and staying for a month, doing hundreds of extractions and fillings for the Indian children. The Delaware press called him a “Jewish Santa.” Their small children Betsy and Michael attended school with the Indian children while Dr. Mervin worked in the dental clinic, and Joy took care of John, who was a baby. The dental clinic remains to this day. Dr. Mervin continued traveling all over the world, including El Salvador, India, Kenya, and China, volunteering his skills and knowledge to try to improve the dental health of the disadvantaged.

In 1972, Grace Meany joined Dr. Mervin H. Wahl as his hygienist, and she was beloved by her patients for her compassionate chairside manner and gentle hand. After she retired from Wahl Family Dentistry in 2000 she enjoyed spending time with her grandchildren before passing away in 2019 at the age of 83. Our patients still miss you, Grace!

In 1977, Dr. Mervin’s wife Joy (Mrs. Wahl) formally joined the practice as office manager, hiring Susan Hearn in 1978, who was a dental assisting student co-oping at Delcastle High School at the time. Mrs. Wahl enjoyed getting to know so many patients over the years and helping them understand some of their dental health concerns. Mrs. Wahl loved learning about dentistry and, together with Mervin, instilled this to their children. Joy retired in 1996 after Dr. Mervin passed away.

After working side-by-side with Mrs. Wahl for many years, Susan took over as office manager in 1996, and patients are amazed that she still looks the same as when she joined the practice in high school, even though she is now a grandmother! Patients have always enjoyed her warm smile and sparkling personality. Susan uses her extensive knowledge of dentistry and dental insurance to help patients understand their unique dental health situation and their dental benefits. 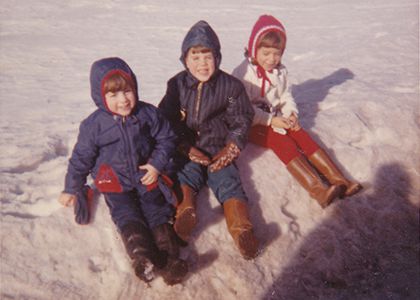 Dr. Michael Wahl (middle), age 4, with his brother John and sister Betsy, who accompanied their father to Montana in January 1965.

Dr. Mervin’s son Michael needed no special enticement to become a dentist. He always admired his father’s passion for learning and sharing his knowledge to provide patients with the best possible dental care. As a senior at Brandywine High School in North Wilmington, Michael was accepted to the Pre-Professional Scholars Program in Dentistry at Case Western Reserve University (CWRU) in Cleveland, reserving a seat at the dental school after attending college there. Michael was impatient to become a dentist and was accepted to dental school senior year in absentia, ultimately receiving his BA (cum laude) and DDS degrees from CWRU. Dr. Michael completed a year of general practice residency at the Medical Center of Delaware (now Christiana Care Health System) before joining Wahl Family Dentistry on July 1, 1986. He considers himself fortunate to have been able to practice with his dad for ten years before Dr. Mervin passed away, and he has always considered the dental knowledge received from his dad to be at least as comprehensive as the formal education he received from school.

Patrick also attended Brandywine High School and attended the University of Pennsylvania for college, doing well enough to skip his senior year to attend Temple University School of Dentistry and completing his general practice residency at the Medical Center of Delaware (now Christiana Care Health Services) in 1991, when he joined Wahl Family Dentistry. He later was accepted into the endodontic specialty program at the University of Pennsylvania School of Dental Medicine and practiced as an endodontist at Wahl Family Dentistry. He left in 2020 to pursue a career as a lawyer.

The Wahl family in 1970. Dr. Mike (second from left) and Dr. Pat (far right – no pun intended) along with siblings and their mother Joy.

Today, they continue the family tradition along with Dr. Margaret Schmitt, a longtime friend of the Wahl family. Peggy attended Brandywine High School in North Wilmington and then Ohio University, doing well enough to skip her senior year to attend Temple University School of Dentistry and completing her general practice residency at the Medical Center of Delaware (now Christiana Care Health Services) before joining Wahl Family Dentistry in 1991. Pat’s wife, Dr. Jean Wahl, originally from northern New Jersey, graduated from Rutgers University in 1990 and the University of Pennsylvania School of Dental Medicine in 1994. She then completed a two-year general practice residency at Staten Island University Hospital and practiced at Wahl Family Dentistry from 2002 until 2018.

Dr. Michael’s children Kira and Leah joined the practice in 2009 and are very enthusiastic workers! They love to help the rest of the staff by stocking the rooms with supplies. All of the dentists have continued Dr. Mervin’s legacy of caring, compassion, and excellence, including caring for patients, researching, publishing, teaching dentists and dental students, and donating services to those less fortunate, both in the Delaware area and around the world. In January 2010, Wahl Family Dentistry moved to a new facility at 2003 Concord Pike, between WSFS and IHOP, next to the Acme in Fairfax.

Dr. Mervin passed away in 1996 after a long battle with leukemia, but he instilled a lifelong love of caring and excellence in his children, who have continued his legacy, along with his grandchildren (Kira and Leah Wahl), making people smile ever since. Under the direction of Dr. Michael Wahl, our team continues a tradition of excellence, treating every patient with genuine compassion, clinical excellence, and personalized care. We’re sure you’ll feel at home here because nobody treats you better than family.

We offer a full range of dentistry for patients of all ages. Checkups, cleanings, restorations, cosmetic dental work, complete dental implant procedures, and more are available in our office. As a family-operated dental practice, we understand the busy life you lead. That’s why we offer same-day visits most days, an online payment option, and efficient clinical care. Evening (Tuesdays and Thursdays) and weekend (some Saturdays) appointments are available too. We will file your insurance claims and offer a variety of payment options, including financing for most cases.

A healthy, beautiful smile will make you feel good inside and out. Let the Wahl Family Dentistry team help give you a smile you’ll enjoy for the rest of your life!

Click here to read about the Wahl family’s charitable work.