One of my Favorite Hobbies is American History 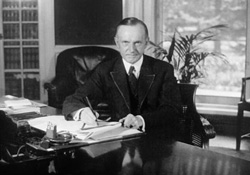 My father Dr. Mervin Wahl was the founder of Wahl Family Dentistry, and when he was born in 1923, Calvin Coolidge was president.  One of my favorite hobbies is American history, and I read a lot about it.  There are also some great television shows about American history, including on C-Span.  I’ve been watching the 1999 C-span presentation on Calvin “Silent Cal” Coolidge (http://www.c-spanvideo.org/program/151626-1), who became president when Warren Harding died in office.  It is over 2 and 1/2 hours long, and it shows interviews with historians, museum curators, and President Coolidge himself (a re-enactor).  Many people underestimated Coolidge because he was so reticent.   Coolidge was actually a very interesting man and an excellent president.  I hope you enjoy it as much as I do!

On the show “President” Coolidge (the re-enactor) said that he had the following poem on the wall of his house:

The less he spoke
The more he heard