Smiles of the Day

Our smiles of the day belong to Milaka White and her Uncle Keenan. What great patients they are! 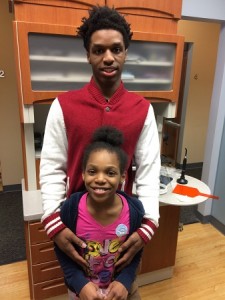 I love our new business cards. I hired Kira to draw the apple with a bite out of it, and she did an excellent job. Thanks Kira! 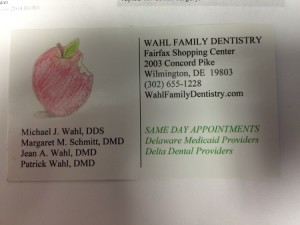 I am lucky to know more than a few people who have touched my life in a positive way. Certainly, my father was a giant in my life as he was a wonderful role model and even though he’s gone now, I still think of him every day. He was a great husband, father, grandfather, and dentist. Some professors I had in college have also been people I looked up to and tried to emulate. And some people I didn’t know personally have also been excellent examples. I have read hundreds of biographies of great men and women for insights into their lives. I’ve always admired John D. Rockefeller, Sr., a self-made entrepreneur and philanthropist, a wonderful family man, and scrupulously honest. C. Edmund Kells was a dentist, inventor, and author who entered his father’s practice in the late 1800s as I entered my dad’s practice in the late 1900s.

Although I’m sure he didn’t know it (he was quite modest), Jack Jurden was a role model of mine. Unfortunately, Jack passed away on March 17, 2015 at the age of 88, but what a wonderful life he led. He and his lovely wife Faye (who passed away a few years ago) met my parents through mutual friends in the 1980s and later became patients in our practice. Before I met him, my parents told me all about Jack, who was the full-time editorial cartoonist for the News Journal. The four of them would be out to dinner at a restaurant and in a period of five or ten minutes, unbeknownst to my parents, he would be constructing an ingenious and hilarious cartoon about them – with perfect likenesses – on a used dinner napkin and then surprise them with the napkin! My dad was so impressed that he would frame the dirty napkin. (When he found out, Jack would kindly offer to remake the cartoon on a clean piece of paper.) When I joined the practice in 1986, Jack and Faye were very kind to me, even though I was the “new kid.” 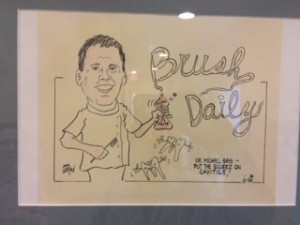 Everyone works to make a living, and Jack made a good living, supporting his wife and family. But Jack worked not only to make a living, but also because he loved doing what he did. Creativity coursed through his veins, and he had to express it every day in the form of witty and insightful cartoons. His cartoons still grace the walls of everywhere from presidential museums to bungalows to dental offices (including ours). 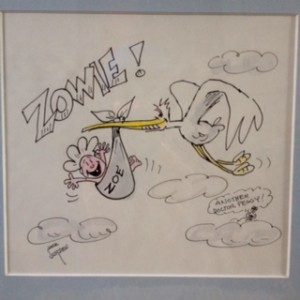 Jack was a great family man, and along with Faye raised two girls into successful women: Jennifer, a graphic artist and professional cartoonist herself, and Jan, chief judge of Superior Court and a talented amateur cartoonist also — the creativity is in their genes. Like Jack and Faye, Tina and I are now in the process of raising two girls (12 and 10 years old now) who we hope will also be successful women one day.

Jack was Dr. Peggy’s patient for more than the last ten years, and the two developed a warm friendship, often going to lunch together. The four decades difference in ages didn’t matter – Jack’s warmth and personality transcended age.

It was an honor and a privilege to know personally the man who conceived the funny and insightful cartoons that our family read every day in the newspaper. Although he would tell my parents and me that he couldn’t understand why we would want to frame a random cartoon he drew on a dinner napkin, the confusion was mutual: I would tell him that I couldn’t understand how he could think up such brilliant ideas sometimes at the spur of a moment. I could sit in a room alone for a week and not be able to conceive a cartoon like he could apparently in just a few minutes. And he had to come up with new ones every day for his job. What a sharp mind he had. 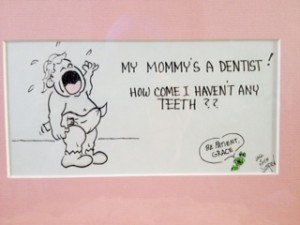 It’s often said that if you enjoy your job, then it’s not work. That’s how I feel about my job – I love being a dentist and running the dental practice (though admittedly, not every single second of it). When I’m not in the office, I’m reading or writing dental journal articles, thinking about how to treat patients better, or buying supplies for it. And it’s not out of a sense of obligation. On the contrary, it’s because I love doing it. So it was with Jack Jurden. He loved what he did. He was constantly thinking up new ideas and putting them down on paper in the form of his cartoons. There was a man who didn’t consider work to be work. Those people who love their jobs are the ones who are the best at them.

When Jack would come to the office, he always had a smile on his face. He had a magnetic personality and would frequently draw cartoons during his visit of the staff at the office. He was literally larger than life, and he was bursting with energy. Even though he was a celebrity in Delaware, he treated everyone in the office with kindness. 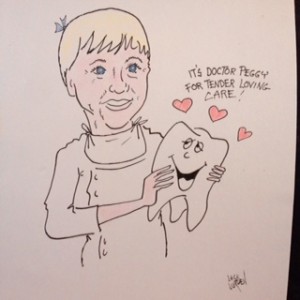 You can get an idea of Jack Jurden from some of these cartoons. Note that he drew wonderful cartoons about Dr. Peggy’s children, Zoe and Grace. Not only were they funny and drawn well – they were so thoughtful! And when he couldn’t make lunch with Peggy one day, he drew her a funny cartoon: “She can get on my nerves any time!” Hilarious!

Even Our Dog Has Good Oral Hygiene

Our dog Karma got hold of one of our toothbrushes and started chewing on it. Karma is the one with the pink toothbrush in his mouth.

The New York Times Has an Interesting Article on Teeth Whitening Today. From the Article:

Higher concentrations of hydrogen peroxide, a bleaching agent used in many whiteners, can be delivered in a dentist’s office, so those procedures tend to be quicker than drugstore aids. But tooth sensitivity and gum irritation can occur, and the higher the concentration of the peroxide used, the more severe these side effects are likely to be.

More aggressive treatment isn’t necessarily more efficacious, either. A randomized trial of 90 patients found that use of a home bleaching tray with a 10 percent carbamide peroxide gel for two weeks offered the same degree of whitening as two in-office sessions using 35 percent hydrogen peroxide with light, which some dentists use because it supposedly activates bleaching agents.

Some dentists also use heat or even lasers to activate bleaching agents. But a 2007 systematic review of evidence in the journal Dental Materials found no added benefit from heat, light or lasers and suggested these methods “may have an adverse effect on pulpal tissue,” the soft material in the tooth’s center. If pulp is injured, it may require a root canal to fix.

Because one Y wasn’t enough, after visiting the Central Y, Toothy visited the children at the Walnut Street Y on Thursday, March 19, 2015.

Toothy took a break from working out at the gym at the Central YMCA to visit the day care there. The kids loved him!

Wahl Family Dentistry dentists Drs. Mike, Jean, and Peggy published the results of their research in another article recently.

We not only enjoy helping our patients with their dental needs, but we also enjoy researching better dental techniques and sharing our findings with the dental profession. “Dental extractions, antibiotics and curettage — first, do no harm” was published in a 2014 issue of the Global Journal of Medical Research: Dentistry and Otolaryngology. Among other findings, the authors found that preoperative or postoperative antibiotics did not appear to affect radiographic healing of periapical lesions after dental extractions. You may find the article to be highly interesting or you may find it to help you fall asleep.

Tina visited Highlands Elementary to share some good information on oral health and hygiene. Although Toothy couldn’t make it today, the children enjoyed the presentation. 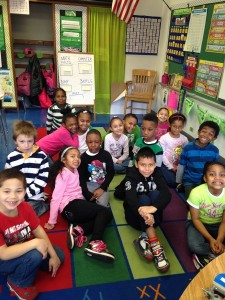 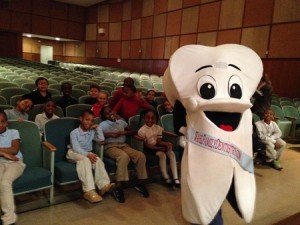 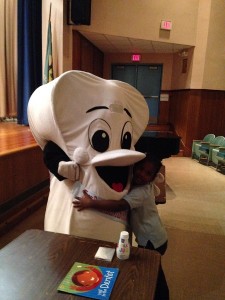