A recent study published in General Dentistry has shown that cheese and dairy products may reduce cavities. A diet including cheese, milk, and sugar-free yogurt raises pH levels above 5.5. This higher pH is associated with lower levels of decay.

Snapping Turtle in my Driveway!

I was on my way to work when I saw what I thought was a branch — very common after heavy rains when you live in the woods. When I got closer, U saw that it was actually a large turtle — about 18 inches from head to the tip of his long tail. I know it was a snapper because when I touched his tail, he quickly attempted to snap my finger off!

I called my girls to come see it, and they brought some strawberries, making a trail out of them so the turtle would get out of the driveway by eating the strawberries.

My girls often complain that there aren’t many kids in our neighborhood, and while they are right, I like to point out what nice animals we have in the neighborhood — deer, fox, groundhogs, rabbits, box turtles, and yes, a snapping turtle!

Leah (on the right) and her friend invented a fun new game on Game Day at their school! 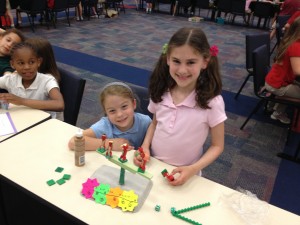